Carrie came on stage at 12pm and performed 3 songs then met the crowd to sign cd's. She was lovely to talk with & I gave her a little gift bag of some aussie goodie's. We chatted while she signed and had a nice hug but her minder was very rude & was trying to hurry her up with me, while Carrie seemed in no rush at all & ignored her & finished our conversation!! (would hate to have rude minders telling me what to do!) So between the both of us we got a cd & photo signed (she was not supposed to sign the photo but she did!) & we got to have some photos with her. 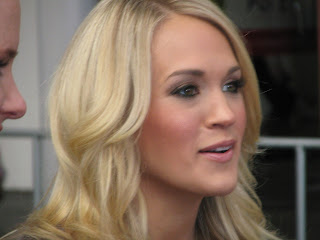